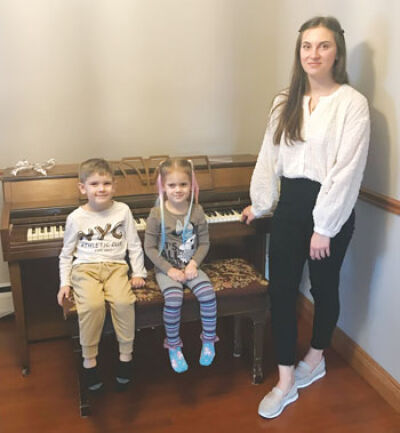 Elvira Rohovets and her children, Lev, age 5, and Maia, age 3, welcome their new piano into their home, gifted to them from The Piano Place in Troy after having to leave their home in war-torn Ukraine.

TROY — A family in Troy got a surprise gift this Christmas after a long journey filled with war and hardships.

Elvira Rohovets, her husband, Nickolay, and their children, Lev, age 5, and Maia, age 3, recently immigrated to the United States, fleeing the war in their homeland of Ukraine. Settling in Troy, they were shocked to learn that friends and neighbors had arranged for their family to receive a new piano courtesy of The Piano Place, a Troy-based music business.

“They are a family from Ukraine where there is now a war, and they were looking for a safe place for themselves and their kids. We came in September,” said friend Olga Schmidt, translating for Elvira. “In 2014, when the war started, we lived in Donetsk. Then we moved to Kharkiv. From Kharkiv we came here after the war reached there.”

The piano was delivered Dec. 23. The Rohovets family expressed their gratitude and appreciation.

“I am very grateful to get the piano delivered just before Christmas. It was wonderful. It was the best gift,” Elvira remarked through the translator. “I really hope my kids can start playing, since it will help them a lot. They’ve been through a lot, and this will help with their integration,” in the United States.

Scott Blackett, the office manager of The Piano Place, said they were happy to make the donation and have been giving several of their pianos away to those in need of them in the last few years.

“We’ve given about 15 or so pianos to the Detroit (Public) Schools district for free. We paid for the moving and stuff. We had five or six left, but the Detroit schools were full up on pianos they could handle right now,” Blackett said. “We’ve been looking for places to give them, and this was the perfect situation. The movers bent over backwards to get it here before Christmas. They had to move the piano essentially in a blizzard on Dec. 23, so they did great work.”

Blackett was connected to the Rohovets family through Schmidt. Schmidt met Blackett through the Troy Chamber of Commerce, and she was a friend to Elvira through an organization called The Creative Society, and helped her and her family get settled in the United States.

“Scott and I were talking at the (Troy) Chamber of Commerce, and we had some similar interests,” Schmidt said. “He and I met for coffee, and I told him about Elvira and how she used to play piano and if they had a free piano, they would love it.”

Elvira said she was overwhelmed at the outpouring of goodwill.

“I’m very thankful to Scott for doing this,” she remarked. “Not only did they give us the piano, but they also delivered it and tuned it. I’m thankful to Olga for introducing us and for people all over the world who are trying to help.”

Blackett also was able to secure an extra gift for the Rohovets family.

“I was telling my son about this, and he said he could get a gift membership for the whole family for a whole year to the Cranbrook Science Institute,” he said. “He works there, and we thought it would be a great resource for the family to have.”

Elvira said the future is difficult to plan for in their situation, but these gifts have made life easier and made the future a bit less intimidating.

“It wasn’t too bad coming here, because we had friends here who also were participants of the Creative Society, so they helped us get accustomed here,” she said. “It is a hard question (whether they ever will return to Ukraine). When we left Donetsk, we also thought we were going to come back. We’re not building those long-term goals. … I know some Ukrainians here who want to return. Because my family is going through this for the second time, we just don’t build those future plans like that.”

Comments will be approved before showing up.

Also in The Piano Place Blog

Fazioli Pianos has been producing grand and concert grand pianos since 1981, when the company was founded by the engineer and pianist Paolo Fazioli. Passion for music, great artisanship, continuous technological research, and strict material selection: these are the elements required for building a Fazioli piano.

Since 1980, Casio has been creating musical instruments using constantly evolving technology. Today, players of all levels enjoy Casio instruments at home, on stage, and in the studio.